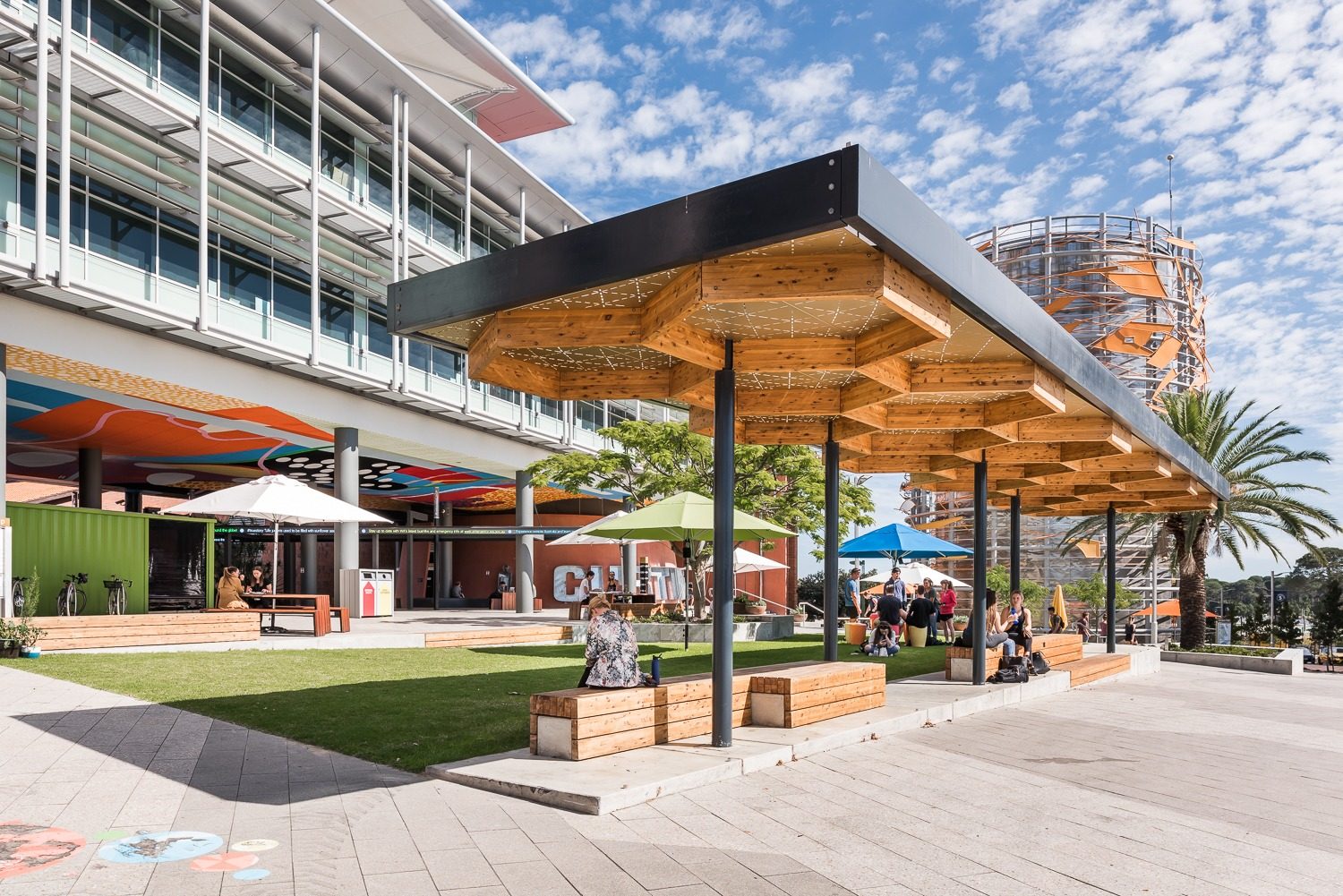 Curtin University’s Innovation Street, Medical School Entry & Courtyard (designed by PLACE Laboratory) are the first significant projects to be realised according to the aims and ambitions established by the Greater Curtin Masterplan developed by Curtin in 2014.

The Greater Curtin Masterplan sets out a vision to create a new community that will transform its isolated suburban campus in Bentley into a vibrant and diverse urban centre. A place where innovation and opportunity can thrive, where academics, entrepreneurs and businesses can exchange knowledge, and creative relationships lead to new innovations and exciting possibilities.

Innovation Street and the Medical School heralds the coming together of the past and future by creating a physical and symbolic link that stitches the old campus (academic core) with the new campus (urban centre) at this critical northern gateway. The projects establish a benchmark for the delivery of the future Greater Curtin Masterplan in terms of best practice outcomes for urban campus environments and a public realm that puts peoples’ experience front and centre – while also addressing all the complexities the efficient functioning of an urban centre entails. It also signals a new design language and unique Curtin identity for the future development of the Public Realm in terms of materials palette, paving patterns, spatial hierarchy, urban infrastructure and furniture.

The completed works have transformed the northern part of the campus with several strategic interventions opening up the campus’s academic core and main pedestrian spine (“Corso”) which previously terminated at a series of narrow walkways between imposing built forms that opened out onto a sea of carparks and empty spaces. The upgrade to Wesfarmers Court (JCY Architects) and the removal of the large domed structures is supported by the landscape treatment which creates a series of elevated lawn terraces, and fixed / flexible seating spaces that descend to Innovation Street and the Medical School Entry. Mature tree transplants and a large scaled but thoughtfully detailed canopy structure provide shade and comfort while open lawn areas are popular with groups to gather, socialise and soak up the sunshine offered by the north facing orientation.

A “Curtin” paving pattern and specific street detailing (precast kerbs, tree wells, multipole lighting etc) were developed, sympathetic to the Campuses built form and existing material palette but also signalling the beginning of a new era ­- setting the tone for quality and expectations for future works associated with the Greater Curtin Masterplan.

The social vitality that has emerged as a result of these works will be further enhanced with the completion of Greater Curtin Stage1, which will include the development of the adjacent lots and is likely to include new teaching facilities as well as student housing and apartments supported with food and beverage and retail activating the ground floor at street level. The increase in people and activity with the Stage1 development will build upon and further enhance the energy, interactions and socialising that is already taking place.